The last time people in Italy welcomed new ingredients into their traditional cuisine was shortly after Columbus’ trips to the “New World”.   Since those famous intercultural exchanges, the Italians have spent the last 500 years perfecting food that can be produced locally.  I love the fact that local food is still cheap here.

Somehow the Italians have resisted the temptation to completely industrialize their food systems. I’m not going to go on a full-on, 100 page rant about how backwards America’s food production systems are.  There are plenty of people who write a lot better than I do who’ve written a lot about that already. Sorry if it sounds un-patriotic to say that I don’t think that we’re #1 in the field of quality food production. I still like America, but our food system is mind-boggling, and perverse when compared to most of the rest of the world and it certainly can’t hold a candle to what is simply normal in Italy.  Our only saving grace right now may be beer… but that’s another blog entry…

Enough negativity though! There is indeed great food that I do miss very much that one can only find in the US… Let’s jump back over to Europe and I’ll give you my impressions of Amsterdam’s relationship to food so far. Unlike Italians, the Dutch love exotic foods, different flavors, and the fusion of cultures on the plate. It’s easy to find cuisine from all over the world. Similar to Columbus, the Dutch were into traveling to faraway places and taking everything. I’m not a historian, so I won’t get into the details of colonialism. I’ll just say that stealing things from natives only to sell them back in Europe and the Americas turned out to be a successful business model despite lacking heavily on the ethics side of things. If only Siena Italian Studies existed back then. We could have taught those guys a few things about intercultural exchange!   The arrival of new spices, fruits, and vegetables not only meant new sources for wealth in Holland, but it meant tastier food. The daughter of Marianna’s supervising Professor is also our babysitter for Sean. I asked her about traditional Dutch food and she told me that it’s basically just boiled vegetables mashed up and if you want to get fancy, you just put a sausage or some cheese on top.

My impression of eating in Amsterdam is generally a good one and the locals appear to be less confined to tradition and far more adventurous than most Italians.   I’ve seen things like the infusing of pesto in traditional gouda cheese. This is probably be a crime punishable by law in Italy. I’ll look it up.  The supermarkets in Amsterdam are a medley of world foods mixed with local products. For me the contrast with Italy is so interesting. The foreign section is so small in Siena’s supermarkets that there’s usually no more than 20 items.  It’s apparent that the locals in Amsterdam actually know what to do with exotic products. I can imagine trying to convince the average Italian that coconut milk is an edible food.  If I succeeded, they’d probably just put it in a bowl at the edge of the table, far away from everything else, regretfully offering a spoonful to anyone brave enough. Putting it in a rice dish? Unthinkable.

I mentioned that Italy has resisted industrialization of the food systems, Holland did not resist. I learned that the Dutch have taken greenhouse growing to levels beyond belief. It’s not surprising that a country that doesn’t see the sun very much would need to rely on greenhouses, however their efficiency is unbelievable. The Dutch sell their greenhouse vegetables all over the world in places like San Diego and yes…. Even Italy. It’s not uncommon to find that many out-of-season vegetables in Italy come from Holland!  I’m not sure what I think about that…

There’s genius in being able to sell vegetables from Holland in Italy, but the quality is just not the same.  The average Italian’s understanding of quality is something that has always amazed me and I’ve tried my best to understand for myself. Where else can you hear a group of middle-schoolers remark surprised to see strawberries out of season? Where else are there middle-schoolers who know that fruit and vegetables are seasonal? 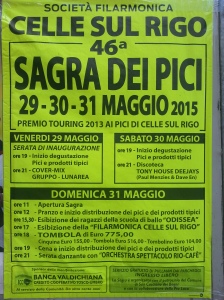 This past weekend I went to a “sagra” with some friends. A sagra is a festival dedicated to one type of food. They’re usually held in small towns in the countryside as a way to raise money for small organizations in those towns. It’s not easy for tourists to find them as they’re advertised on posters stuck to walls around surrounding towns with little explanation. If you know, then you know… and you go. Probably the most telling thing about sagras are the amount of elderly italians that frequent them. The idea of “grandma’s cooking” is still a very real thing, so if you see a lot of grandmas, then it’s good sign.

The sagra that we attended was dedicated to pici (pee-chee). A type of pasta similar to spaghetti, but it’s hand-rolled and thus, much thicker. On the menu: Pici and two or three meat and vegetable choices to go along with the pasta.   That’s it.

The town of probably 400 people hosted an average of about 1000 people per night for three nights. 20-some local women spent three days hand-rolling pici. The thing that struck me as an American, was the choice by the e 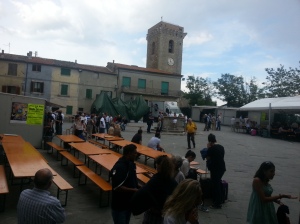 vent coordinators to forgo efficiency in honor of the pasta. What does this mean? I’ll explain, but one must understand how to cook pasta.  Many of you may not know that pasta should be cooked quickly, and then eaten immediately. If you’re cooking pasta for 20 minutes and leaving it sit in the water or in a bowl for a while, I’m so so sorry for you. You’re doing it all wrong. The line for pici at this particular sagra took forever because for each individual order that was placed the corresponding amount of pici were thrown into the boiling water and cooked with individual and due respect. This meant cooking thousands of plates of pasta on-the-spot.  The wait was worth it.

There were only two choices for sauces. Tomato sauce and meat sauce. Both were perfect. A lesson to be learned I think is that the more choices offered, the harder it is to guarantee quality. Less choices, for many is an attack on freedom. For me to see one item on a menu is an almost arrogant challenge that says .. “trust me”.

What’s better then, tradition  or progress when it comes to food?  I don’t know.  Lucky for me, I don’t have to choose!  I’ll be back up in Amsterdam for a quick weekend visit and it’s just my luck that the Taste of Amsterdam Festival will take place while I’m there!