Sometimes you just gotta go outside. When I was little and there wasn’t time to drive up into the mountains my Dad would take me to Denver’s City Park and we’d eat a sandwich on what he called the “solar rock”. It was a large rock that sat on the southern side of the Natural History Museum, in the middle of a gently sloping field. No matter what time of year it was, that rock was always warm. I didn’t really understand when I was young what the “solar” part of the name meant, and I assumed that the rock possessed some kind of amateur magical power. Later, I’d figure it out.

A quick drive from Denver (or a long drive) and the word “outside” takes on meanings that are difficult for Europeans to understand. Despite being constantly under threat, we still have wilderness and we’ve made national and state parks out of those spaces to protect them. They’re not as wild as they used to be, but they aren’t paved or inhabited by anyone but the native, animal residents and occasional hikers. In Europe they did away with most of their wilderness hundreds of years ago and in some cases, thousands of years ago. I recently learned that places like Sicily and other parts of Italy that are rather dry and arid were once home to huge forests until the Phoenecians, Greeks, and Romans took them all down to build their empires. Too bad there wasn’t a Roman John Muir. Even in the Alps, where spaces are open and wild animals roam, it’s hard to really get lost before you find roads and huts where people live. This isn’t to say that the Alps aren’t wonderful, they’re just not wild.

Far away from Colorado, when in Amsterdam the majority of our free time as a family is spent in parks.  A city with a population so densely concentrated, Amsterdam boasts an astounding amount of parks. Wikipedia tells us that “Parks and nature reserves make up 12% of Amsterdam’s land area”. Some of the parks are huge like the Amsterdamse Bos, Westerpark, and the famous Vondelpark. They are always full of people and events, but they were designed in such a way that one never feels suffocated by people.

Houses are small and smashed together, but around every corner there’s a playground, sand box to play in, a small soccer field, a basketball court, or a field to roll around in. We don’t feel trapped in our tiny little hole-of-an-apartment because there’s always a place to play and run around a quick walk away. 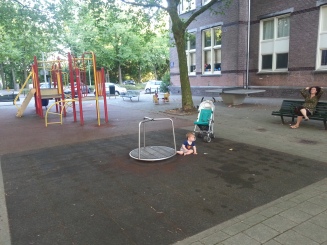 Sean can’t run yet, but he’s almost there and there will plenty of places to do it. It’s easy to perceive a sense the sense of respect for the common good by how clean the parks and playgrounds are in Amsterdam. They really are extensions of everyone’s homes and everyone does their part to keep them safe and clean. I really love this sense of community and it reminds me of the same respect that’s given to what wilderness we have left in the western US.

In Siena, like in most of the cities in Tuscany, there are parks but they’re small and usually covered in gravel or stone. Public parks for running around in, kicking a ball, or having a pic-nic aren’t that common. The “piazza” is where Italians practice urban leisure. Siena is full of beautiful piazza’s, but they are places to see and be seen not places for recreation. Our students, who take the recreational approach to public space will occasionally be reprimanded by local police in Siena for laying down, eating, or reading a book in the Piazza Del Campo during the day. It seems absurd to me, but Italians do their recreational activities in private or… at the beach.

The beach is the ultimate park for the Italians and when at the beach, anything goes. One can wear whatever they want, kick, throw, and hit balls, fly kites, splash, and generally do everything that would be considered a bit rude in most cities. While any sign of wilderness has been eradicated from the majority of Italy’s coastline, one still feels extremely healthy and relaxed at the beach.

There is certainly more than one way to enjoy being outside, and I hope that with what’s left of the summer you’ll all get to go to your favorite outdoor places.