In 2005, my boss took me to a conference. It was in South Dakota on the Pine Ridge Indian reservation. The conference was held by an organization with whom we still work that sends students abroad for Service-Learning experiences (volunteering combined with coursework). The organization is based in the US and is named IPSL, but I’m not going to focus on them but rather my profoundly surreal experience at that conference.

I was by far the youngest person in attendance at the conference. My badge read “Mike Manchester – Siena, Italy” and we were in an America that is very far from the reality of anywhere that I had known before. Almost immediately, my boss and I were separated into different work groups. I didn’t know anyone and I didn’t really know what to say. The only person who spoke to me was a Jamaican woman who was a professor at the University of Kingston and who referred to me as “boy” in a wonderful, glowing Jamaican accent. We sat next to each other on the bus during a tour of the reservation and at one point our Lakota guide nonchalantly mentioned how once, when she was participating in a traditional dance, some UFO’s came down to watch and she remembered how her uncle said that it was important to pray for everything in the universe, even that which we do not understand.   Holy shit. Much of what I previously thought about the world and had categorised as “understood” flew back into the unknown.

At that conference the organization gave out little promotional buttons and on them was written one a slogan that has since resonated with me and I believe always will. The button read “Complicate Your Perspective.” That motto has meant a lot to me, and is somehow comforting when life is confusing. A wider perspective is a positive and 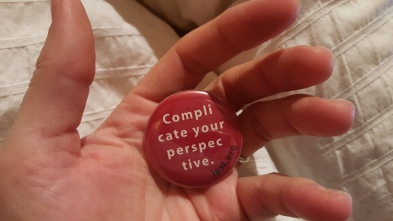 powerful thing, but is ultimately more complicated than closed-mindedness.

I was up in Amsterdam this weekend. Local and world events had me thinking about how complicated things are. On a Sunday morning following the recent attacks in Paris one and a half days prior, inevitable and awful thoughts in the back of our minds, we set out despite wind and rain with Sean to witness the parade celebrating the annual arrival of Santa Claus to Amsterdam… via boat… from Spain…

Yes, the Dutch have a different story about the made-up guy that delivers presents to children. If you find yourself thinking that this is ridiculous, let me remind you that your story of Santa Claus is itself indeed a farce, and the Dutch story precedes the American tradition, that has subsequently been popularized throughout the world. I’m relatively certain that Santa Claus doesn’t exist so why would anyone say the Dutch are wrong? It’s a different perspective, no big deal right? Yeah… Just look at the messes created by some of the more institutionalized made-up stories around the world and how much people are willing to do to protect their perspective as if it were pure truth.

Anyway, here’s how the Dutch story goes as far as I understand it. Santa Claus is named Sinterklaas and he’s actually St. Nicolas. He lives in Spain most of the year but he comes up to the Netherlands for around a three and a half weeks. He comes by boat and visits various towns. In Amsterdam there’s a parade along the canals as his boat passes by and then he gets on a horse and continues to parade around town for a few more hours. He hangs out in the Netherlands for a while and then gives presents to the children on the 6th of December, rather than on Christmas. As for the the naughty kids, they don’t get coal, they get thrown in a bag and hauled off back to Spain. Indeed a pretty funny story, however I admit that it’s more plausible than a guy who lives in the uninhabitable north pole and uses flying reindeer to travel the entire planet.   I’m going to have to be creative in order to fuse the stories so that it all makes sense to Sean.

The American Santa Claus has elves that work for him while Sinterklaas has Black Pete. Here’s where things turn controversial. Black Pete is Sinterklaas’ helper and is responsible for delivering the children’s presents via their respective chimneys. He’s also a slave. Well, OK, he’s officially Sinterklaas’ assistant, but his clothing is from the period of the height of The Dutch involvement in (or leader of) the slave trade. Black Pete, is well, Black. Since there aren’t too many black people jumping at the opportunity to fill the role of the playful, mischievous slave, Black Pete is usually depicted as a white person, painted black.

Seen from the outside this is downright racist and I was decidedly uncomfortable among all of the happily painted revelers. Even from Dutch perspective, it’s pretty controversial however I think that it’s pretty interesting that most Dutch people, from all races, don’t really see this as a big deal. Many people are opposed, but the majority of the campaigns against the festival come from outside of The Netherlands. I certainly won’t be painting Sean’s face black any time soon, and I do find myself asking “Why can’t Black Pete, just be Pete from now on? It’s 2015 for Pete’s sake!” However, trying to think about this from the Dutch point of view definitely adds another angle to the perspective.

It’s hard to not contrast and compare this with the issues and discussion about race taking place in the US right now. There are huge differences though. The Dutch see Sinterklaas and Black Pete as part of their history, and while I’m sure that many are less thrilled than others to see Black Pete running around with his face painted, it’s evident that this story is from times long gone. It’s not a commentary on present times. In reality, Amsterdam is much better integrated than most US cities, or at least the ones I’ve been in.   Despite having been masters of the slave trade, the Dutch put that behind themselves better than the Americans. Of course, there are radicals who make racist comments, and insensitivity is just as common as anywhere but the Dutch never purposefully and systematically segregated their cities, creating ghettoes that are nearly impossible to escape. The police don’t actively seek people out based on skin color and nobody would ever be seen flying a flag that represents the good old days of slavery. Black Pete is insensitive and wouldn’t fly in the USA, but much of what does fly in the USA makes insensitivity enviable.

Thinking about all of this in front of the backdrop of terrorism running rampant all over the place indeed makes for a complicated perspective. What is the right thing to do? The right way to act? I don’t know, but I’ll start by taking all of the perspectives that I know into consideration.